The Flir i7 is the top of the range model in Flir’s new entry level “i” series thermal imaging infrared cameras. As such it supports the larger sized 120×120 which provides a respectable 14,400 pixels of resolution. This is significantly greater than the Flir i5 and Flir i3 which are 6,400 and 3,600 pixels respectively. And boy, does it show! The image is far superior to that of the fledgling models and you might actually consider this camera as a serious contender in the entry level infrared camera market. Being part of a trio, it is virtually impossible to consider this camera in isolation, and as such the review reads more as a compare between the 3 models in the series.

Without the ability to focus, it’s hard to describe the images as crisp but it appears leagues ahead of the other two models. I know it’s nearly double the price of the Flir i3 and about 30% more than the Flir i5, but in real terms it is night and day. If you are using this camera for the intended purpose of predictive maintenance, condition assessment, quality assurance, or forensics, it’s real return should far exceed the additional outlay. Quite simply, if you can see more you will find more.

As I mentioned the inability to focus really lets this unit down and almost all the imagery I obtained with the camera had a blurry effect to it. In my opinion this really limits the camera’s use to in-house applications, as the results will never be sharp enough to be considered acceptable for commercial purposes. As I have mentioned in a review of the Flir i3, focus free should not be confused with autofocus, and the fact that the focal point cannot be adjusted means that most images will be slightly out of focus. I found the best focal length to be around 1 – 2 meters, however anything outside that tended to get worse. It would be impossible to use on Printed Circuit Boards or looking at small components. The min focal distance is specified as 0.6 meters. This camera simply can’t compete against those that have a focus adjustment. 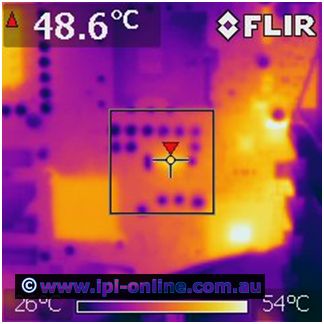 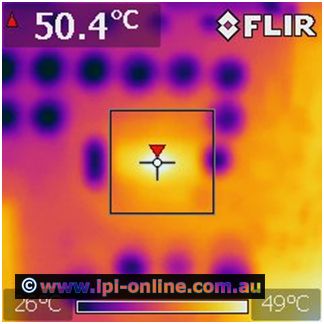 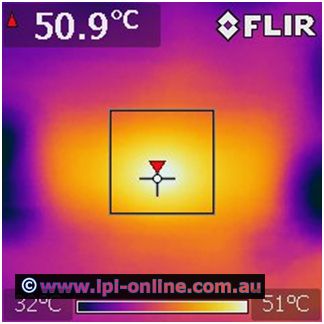 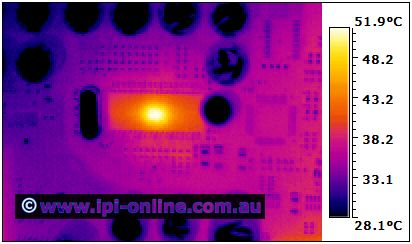 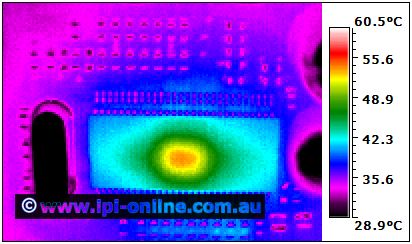 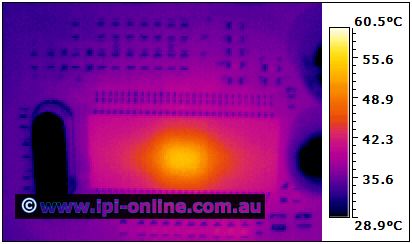 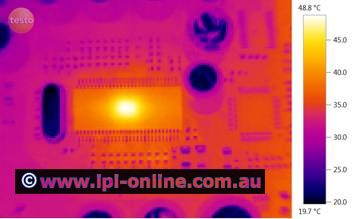 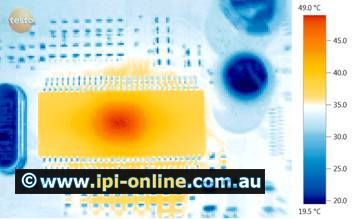 The thermal sensitivity is a very respectable 0.1°C, which squarely places this unit in the build

ing thermography territory. Another aspect of this camera which makes it better suited toward building thermography is the 25° angle lens which is just a little wider than standard. It is miles ahead of the very narrow 12.5° and 17° lenses featured on the Flir i5 and i3. The wider the better!

How does this affect the spatial resolution? Well apparently it doesn’t! According to the specifications, all the Flir i series have the same geometric resolution of which is 3.7 mrad. We can’t work it out, as side by side comparo’s have the Flir i7 creating a much better (not just bigger) image. It must just be a visual illusion.

As with all the i series, this is still a 9Hz camera so the refresh rate is a little stuttered. It would probably frustrate those wanting to walk along conveyor lines etc, and certainly wouldn’t be great for monitoring moving or rotating equipment. But these have never really been entry level applications.

So, what’s it like to use?
Akin to the Flir i3, a major part of it’s appeal is simplicity. The start-up time is very quick, meaning that the camera is a handy to “reach for” tool. The screen is bright and easy to read, but again I am put off by the cluttered display. Of the available 2.8 inch colour LCD screen, I would say 1/3rd of it is taken up with graphics, menus, analysis information etc. The fonts are big and easy to read, but that doesn’t leave much space for the single most important aspect… the image. All the essential information is readily displayed such as the centre point analysis, battery indicator, temperature scale, date and time and the ALL important emissivity setting. While this unit doesn’t have a full screen hot/cold seeking cursor, it does have a very handy “box” analysis tool which does display the user selectable hot/cold spot within the box. Again on small targets things start to get a little cluttered onscreen, but at this price point you have to be prepared to compromise.

The onscreen menu prompts correspond with 2 buttons beneath the screen, and the obvious Up/Down, Left/Right keypad provide intuitive navigation through the menu. A dedicated “play sign” > button gives immediate access to stored images which is a very handy feature and the illuminated on/off button can’t be missed.

Like the Flir i3, the i7 does not allow for manual level and span adjustment. This is only a limitation if you had greater expectations for this unit than it were otherwise intended, and for most entry level users this should not be a deterrent. Instead, the FLIR i7 has a “auto/locked” span feature. When in locked mode this fixes or “holds” the temperature range/span so that you can easily perform qualitative comparisons on targets without your temperature scale constantly adjusting. Unlike many cameras that bury this function deep in secondary menus, this is immediately available on the Flir i7’s primary interface and simple to effect.

All importantly when saving an image to the micro SD card, the Flir i7 displays the image number temporarily so it can be transcribed to your running sheet. This 2GB card will store thousands of radiometric images, in a convenient JPG format. The JPG format is extraordinarily convenient on this style camera, as most users will share images and information outside of the formal report generation format. That is to say, most will just email or share on network drives images of interest. In JPG format the image can be easily viewed by any standard image viewing software (standard with all OS’s) without requiring proprietary software to be installed. This is particularly handy in large organisations where IT departments are reluctant (or slow) to install proprietary software.

The battery time is absolutely amazing. The brochure claims up to 5 hours… it just seems to keep going and going. Even better, recharge time seems to be less than the in-use time.

Compared to similarly priced models, such as the Fluke Ti9 and Testo 875, I would have to be honest in saying the build quality is average. It is hard to pin point the dissatisfaction, other to say it falls short of the physical impressiveness and quality of the aforementioned two. While there is a decent amount of soft rubber around the screen and lens it is not applied with the same finesse or sculptured appeal as it’s rivals, nor does it feel as good in the hand. Despite sharing the same body as the Flir i3 and i5, at this price point my expectations are higher and I would expect more. The plastics feel cheap and there is that noticeable ridge all the way around the unit that makes it feel very ordinary. I can see where they were going with the integrated lens shutter/cap, as it’s one less to dangle or flap around as most lens protectors do. . But it does still feel like the mechanism on a kids toy.

At just 340 grams, the Flir i7 is ergonomically quite petite, and those with bigger hands and/or fingers might find it a little compact. While I applaud the single handed operation, my thumb struggles to navigate the closeness of the keypad. I do find that “rocking” my thumb on the keypad, as opposed to pressing the individual buttons was a better technique that resulted in fewer “miss hits”. One advantage of the small and slim design is that it does easily fit into the average trouser pocket, which is brilliant when scaling ladders, plant equipment, or carrying a multitude of other test equipment.

The Flir i7 comes complete with a very respectable Quickreport PC Software. As we’ve said before this is very basic reporting and analysis software, but it has everything that at entry level user would require. Flying spot meter, area analysis, palette selection and image level and span adjustment is all very easy to find and adjust. The layout is very user friendly and intuitive to use. Reporting is a simple drag and drop affair to generate a multi page document. A minor level of customisation is available, such as changing logo images etc, but otherwise the layout is relatively fixed.

Is it value for money?
When you compare the Flir i7, to i3 and i5 it is certainly a step up. In my opinion the higher and much more useable resolution of the Flir i7 makes this a much better value proposition than the other two. At the time of release, Flir undoubtedly delivered some serious value for money. However, since then Flir’s rival manufacturers have responded with some very stiff competition and you now have some serious contenders in this space….

I’ve seen this camera being flaunted as a step into the “professional or commercial” realm, however i would proceed cautiously. The inability to focus and get a sharp clear image will certainly limit the quality of your presentations.

If you were already using Flir equipment onsite you would definitely stick with the same brand for purposes of continuity (think software, training, familiarity with brand traits etc). If not, it would pay to shop around. 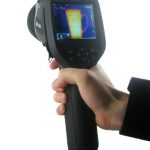 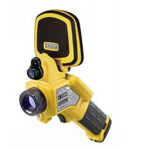