I thought I’d throw up these pictures just for general interest.
This is a view of the exterior of a wood fired dragon kiln (Angama). The kiln is about 20m in overall length. Firing commenced on a Tuesday morning bring the internal temps to about 400C and holding it there for a day. Then temps were raised to 1200C and again held for a couple of days, with periods where the build up of ash inside the kiln was reduced. Final day, (Sunday) temps were raised to 1400C. The kiln has a main fire box at the front consuming a wheelbarrow load of split pine every 20 minutes. There are also side stoking holes which can be seen in the photo’s, generally showing as cooler areas, probably because the bricks blocking the opening are not inserted fully into the flaming gases. The side stoking areas are stoked at intervals and also alternating from site to site to create ash in one are of the kiln or another. The clay pots are placed on shelves or on the floor of the kiln from the front to the back, with spaces between the stacks to permit the introduction of wood into that area through the side stoking hols

A view from the front of the kiln showing the concrete slab across the mouth of the kiln, with the top portion cooler because of the brick structure of the kiln. Surface tempts of the kiln exceeded 160C which was limit of camera’s specs

The photo of the chimney stack shows where a different type of brick was used in the construction so that the centre is radiating far more heat that the top or bottom. The gas plume from the top of the chimney is quite spectacular at night. 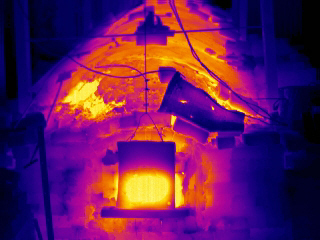 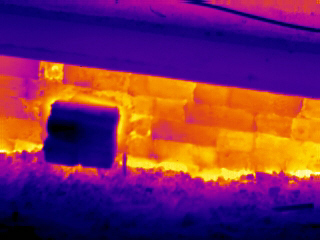 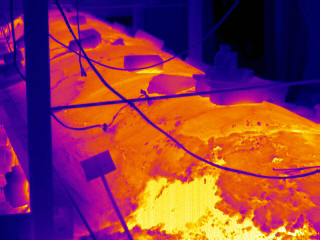 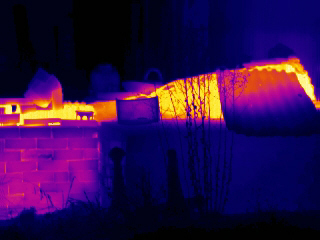 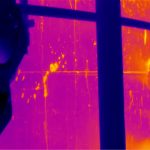 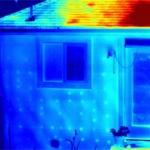 Infrared Thermography as a Diagnostic Tool for Roofing SystemsArticles